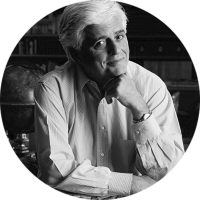 A family-run group, The Heritage Collection was founded in 2011 and since its inception, it has dedicated itself to restoring the splendor of the most exquisite historical estates in Europe.

Our philosophy: a bespoke approach to create ultimate luxury for those with a profound appreciation of the elegant and the finest.

The Heritage Collection commissioned French interior designer, Jacques Garcia to restore all its properties both in Italy and France. Antiquities aficionado, especially of 17th and 18th centuries, his passion for precious materials, the trademark blend of styles and elegance of his designs all made Garcia a perfect choice whom to entrust the delicate historical estates.

For interior design enthusiasts, Monsieur Garcia requires no introduction. In the course of his long and outstanding career, he has left his mark on the finest hotels and private residences. His projects range from La Mamounia in Marrakech to the design spaces in the Louvre dedicated to the 17th and 18th centuries French furniture, to even renovating the royal appartements in the Palais de Versailles. For his achievements, he was named a commander of the Order of Arts and Letters and a Chevalier of the Légion d’honneur.

The Heritage Collection Group commissioned French interior designer, Jacques Garcìa to restore it’s properties to its former glory. Jacques Garcìa is a known connoisseur of 17th- and 18th-century decorative arts. Jacques Garcìa earned international recognition with his renovation of the Hotel Costes in Paris, which sparked a desire for his voluptuous designs that started a style revolution in hotels, restaurants, and private homes.

The grandeur of Garcìa’s style honors and continues the Belle Epoque style, but also explores Bohemian opulence and Classical elegance. His ability to design such traditionally elaborate interiors, that can also acco- modate the modern needs that a hotel or private residence requires is a key to his success. Other notable projects include Hotel La Reserve in Paris, The Nomad Hotel in New York, La Mamounia in Marrakesch and significant restoration of many historical buildings, including the Palace of Versailles.

We use cookies to provide you with a relevant experience by remembering your preferences.
SettingsAccept
Enhance my experience

This website uses cookies to enhance your experience when browsing the site. Of these, cookies that are categorised as necessary are stored on your browser because they are essential for the basic functionality of the website to work. We also use third party cookies that help us analyse and understand how you use this website. These cookies will only be stored in your browser with your consent. You also have the option to decline these cookies. But disabling some of these cookies may affect your browsing experience.